Smažený sýr, also called ‘smažák’, is very popular in the Czech Republic. It’s a classic found on the menu in nearly every restaurant.

Fried cheese is easily made at home. The basic recipe is simple. However, the secret lies in what cheese you use – no need to be scared of experimenting!

Smažený sýr is a slice of hard cheese, about 1/2 inch thick, coated with flour, beaten eggs and breadcrumbs, and then fried in a thick layer of fat.

Fried cheese is meant as a main course and either fries or various types of potatoes (boiled, mashed, crushed) are served as a side dish.

How to Coat and Fry the Perfect Czech Smažený Řízek?

TIP: Dip the cheese in cold water before coating if you want the flour to stick to the cheese better.

What to Do When the Cheese Leaks Out

If you don‘t want the cheese to ooze out during frying, coat it twice in the beaten eggs and breadcrumbs – the crust will be thicker then.

I didn´t double the coating, you can see the sides of the ‘smažák’ have leaked out a bit – but it doesn´t affect the taste of smažený sýr at all!

This word doesn’t have ř in it, so it shouldn’t be too difficult for foreigners to pronounce. 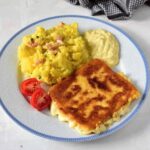 The combination of hot cheese in a crispy crust and tartar sauce stands out the best when served as soon as possible after frying. The longer you let the cheese cool down, the chewier it becomes (no worries, it will still taste great).

Check out these articles below